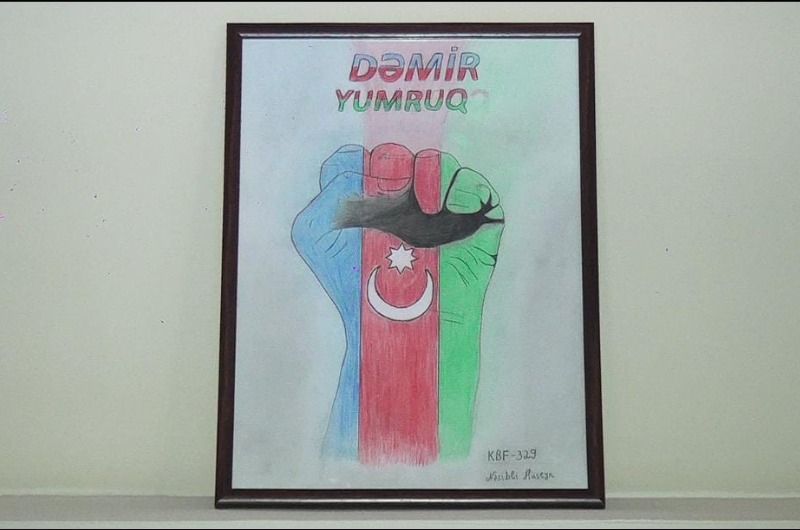 A series of events were organized at Sumgayit State University in connection with the Youth Day. One of them was an online exhibition of students" handicrafts and paintings "Iron Fist - The Road to Victory" in the lobby of the university, dedicated to the glorious struggle of Azerbaijan against the Armenian terror. The purpose of the exhibition was to identify talented young people and give them new creative impetus. Our employees watched the winning handicrafts and paintings on the monitors in the lobby of the university and on the official YouTube channel of SSU. "Maiden Tower", "Shusha Tower", "Aghdam Mosque", "Arrogant position of Artilleryman Vusal", "Iron Fist", "Our Army is Our Pride", which demonstrate the military might of our country, the high fighting spirit of our soldiers, and the paintings and handicrafts dedicated to the souls of our martyrs were welcomed by the participants. The memory of the martyrs who died for the motherland was honored. It was noted that it is the result of the "Iron Fist" policy that today we can easily say that "Karabakh is Azerbaijan." This deed, this desire united our people. Tens of thousands of young Azerbaijanis became a shield in the trenches at the call of the Supreme Commander-in-Chief and marched on the enemy. It is a matter of pride that our students and graduates were among the young people who wrote history with their blood. They proved that Sumgayit State University not only trains a teacher, engineer, historian, but also Heroes of History! Sumgayit State University is proud of every student and graduate who took part in the Great Patriotic War. In this regard, regular meetings were held with veterans on the ZOOM platform, organized by the Student Youth Organization of SSU. In order to educate young people and increase their patriotic spirit, an event was organized by the Student Youth Organization with the participation of more than 700 teachers and students on the ZOOM platform "Homeland Starting from Exhausted Breath". In general, SSU students are actively involved in promoting the successful policy pursued in our country. Our work is the work of truth! Karabakh is Azerbaijan! Historical justice was restored with a 44-day war, which began with a shout, a victory every day, a saga. Our flag was seen on the top of Murov, on the heights of Ruh, in Agoghlan castle, in Shusha fortress, on Khudafarin bridge! By the will of the Supreme Commander-in-Chief, the mighty Azerbaijani Army, the Azerbaijani soldier entered Shusha! Azerbaijan, the Land of Fires, the land of beauties captured by the giants in the fortress, was freed from slavery. The nation, which wrote the Epic of Revival with the blood of the Martyrs of January 20, wrote the History of Salvation, the Manifesto of Eternal Independence with the blood of the Martyrs of the Patriotic War and Veterans. "There is no Karabakh without Shusha, no Azerbaijan without Karabakh at all!" The people rushed to the squares shouting "Karabakh is Azerbaijan!" "I am happy that I kept my Father"s commandment!" "Dear Shusha, you are free! We are back! We will revive you. Muzaffar Supreme Commander-in-Chief, who signed the historic Victory with a 44-day lawsuit, made a journey from Baku to Shusha: The Way of Victory!