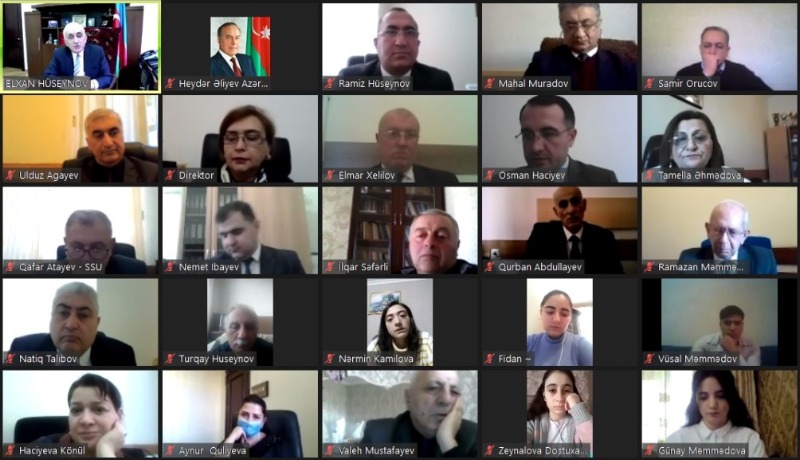 In recent years, the dynamic growth of the country's economy, like all other areas, has created favorable conditions for the development of education, and a new phase has begun. Education, which will ensure the future development of the country, has become the most important area for the formation of human capital. Today, serious reforms are being carried out in science and education in Azerbaijan. The attention and care shown by the President to the development of education confirms that this important factor is included in the list of important principles of state policy. This process is not limited to the capital, but also covers the regions. In accordance with the order of the President and the program of socioeconomic development of the regions, Sumgayit State University has become an influential scientific and educational center not only in the region but also in the country. This higher education institution has signed many projects and raised its relations to a high level. The work done in all laboratories and classrooms to strengthen the material and technical base of Sumgayit State University is another proof of this. Innovations and structural reforms implemented at the University in the fields of teaching, research and management have laid the foundation for fundamental quality changes. Relevant work has been done in terms of the quality of education, as well as the adaptation of classrooms and laboratories to modern standards, repair work has been successfully completed in all educational buildings of the university. Our university has signed cooperation agreements with many prestigious universities around the world in bilateral and multilateral formats. Today, Sumgayit State University is expanding mutually beneficial cooperation with the city's industrial enterprises, as a result of which students undergo internships in these enterprises and are formed as qualified personnel of the future. In general, our education policy is aimed at making education accessible to everyone. However, the availability of education should not only provide knowledge, but also create an environment for students. In this regard, one of the largest projects to be implemented at Sumgayit State University (SSU) in the 2020- 2021 academic year is the overhaul of the university's dormitory No. 1. Both dormitories of the university have been inhabited by IDP families since 1992. As part of the state's efforts to improve the social living conditions of refugees and IDPs, a new settlement for IDPs was built in Sumgayit and the resettlement of families living in the university's dormitory No. 1 was ensured. The dormitory, which has fallen into disrepair, has been designed in accordance with modern standards and it is planned to create all conditions to ensure the comfort of students. The university's dormitory No. 2 is also planned to be renovated in the future. The repair work of the university's dormitory No. 1 is underway. Based on the project submitted by the institutes of the Ministry of Emergency Situations, design estimates were prepared, an expert opinion was obtained, a tender was held, the winning organization was announced and repairs were started. Initially, demolition work was carried out, the basement was dried, and reinforcement works are underway. In addition to about 100 rooms, the dormitory has a library, laundry, dining room and a recreation area for students to spend their free time. On January 28, the rector of the university, Professor Elkhan Huseynov, the Vice-rector for Teaching Organization and Training Technologies, associate professor Natig Talibov, the Vice-rector for Economic Affairs, Naib Hajiyev, got acquainted with the repair and construction work in the dormitory. The rector said that the main task before us is to overhaul the dormitory and give it to our students. Until now, we have not been able to effectively organize the leisure time of our students after school. Also, the lack of a dormitory at the university hindered the implementation of our agreements with a number of leading universities around the world on all items, making student exchange programs ineffective. All conditions will be created here for the comfort of students, heating and water systems, as well as a fire safety system will be installed, living rooms will be equipped with the necessary equipment. It should be noted that the Vice-Rector for Economic Affairs Naib Hajiyev regularly supervises the work in the dormitory.